My Father's Story:
Betrayed by the United Nations
- A Warning for Today 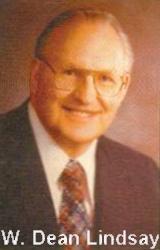 My father, William Dean Lindsay, is a veteran of the Korean War. While growing up, I heard many stirring stories about his experiences in the war. Some parts of it were obviously too gruesome and painful for him to share with us, but one thing was clear: patriotic Americans suffered and died unnecessarily due to the machinations of the United Nations. This was the first war that was fought under the direction of the United Nations, and its goal clearly was not to free Korea, which could have been done easily. Rather, the United Nations ensured that half of Korea would be left in the hands of brutal Communist dictators. American soldiers were betrayed by the United Nations. My father testified about this on Feb. 10, 2003 in Salt Lake City, Utah, before the Government Operations Committee of the Utah House in favor of H.R. 7, entitled, "Resolution to Urge Congress to Withdraw the United States from the United Nations." He spoke as a decorated combat veteran of the Korean War (Army Commendation Ribbon with Medal Pendant and a Bronze Star) and as a resident of Utah concerned about the current and future wars we will fight under the direction of the United Nations. His story and photograph were printed in the April 21, 2003 edition of The New American, page 30. His testimony is also available online at http://www.getusout.org/un/articles/veterans.htm [archived]. Here are his words:

After I had been in combat with my outfit for four months, we were relieved by another division and moved to the rear to rest, regroup, and to receive and train some new soldiers to bring us back up to strength. After a couple of weeks, we were notified that it was time to return to action.

We were told that this was a "Top Secret" move and we were required to remove all insignia from our uniforms, and all identification from trucks, vehicles, and weapons. It was so secret that all movement in our convoy was done at night with Korean runners leading the way. No lights, no cigarettes or even matches were allowed.

We moved to our new position and were ready to occupy it at the appointed time. Up until then, we had no idea where we were or who we were replacing. At 10 o'clock, we began the exchange and suddenly searchlights illuminated our new position and American music blared over loud speakers. Then a voice called out a special "welcome" in English. The speaker identified our division, regiments, and battalions by number and all of our leaders by name.

When the "welcoming party" ended, the enemy opened fire and pounded our position with mortar and artillery fire. The shelling continued most of the night. We sustained some casualties, both dead and wounded.

This horrifying experience only added to the questions that were coming into my mind. How could our enemy know things about us that we did not even know ourselves? And why were we only permitted to play deadly war games with the enemy? We were a vastly superior fighting force, and could have swept them off the land in a short time, but we were not permitted to do so.

After I had been home a number of years, I learned the answer to these questions. The problem was that for the first time in American history, the United States Congress copped out and abdicated their responsibility to declare war, and then compounded the problem by turning control over to the United Nations who orchestrated the war, which, by plan, was to become America's first no-win war.

We were required to notify the UN in advance of every action we planned so that the enemy always knew what we were going to do, thus the special "welcoming party" at our "Top Secret" destination.

Since learning the truth, I have always despised the United Nations, who conned and deceived and exploited me, and hundreds of thousands of other loyal and patriotic Americans. And I have always felt betrayed by the leaders of the land that I love, who placed the precious lives of so many Americans in the hands of a godless organization that had no regard for human life.

In 1952, my father, a green 19-year-old in the 40th Infantry Division, 223rd Regiment, 3rd Battalion, Company M, a heavy weapons support company, was thrown into the fierce fighting of the Korean "Punchbowl" where many good men would die. This unconstitutional war, fought under the direction of foreign powers not seeking the interests of the United States or the cause of liberty, strengthened the United Nations and set up the grim scenario we have today, with the threat of nuclear war emanating from the brutal dictatorship of North Korea, a terrorist-supporting state that has became a threat to the United States.

There are many who would gladly scrap the Constitution and turn America's military over to foreign powers - something that appears to be happening by default in this era. Can we really trust the United Nations to be the supreme power in the modern world? If terrorist states like Syria can sit on the Political and Security Council, directing the course of multinational military actions in the future, what business do we have turning over America's military might to such a corrupt organization? George Bush is working hard to make the United Nations "more relevant" and more effective. Will a stronger United Nations bring world peace? Will a stronger Mafia bring peace to New Jersey? In both cases, the answer is a definite YES - if we use Lenin's definition of peace: "the absence of opposition." Once the United Nations becomes the supreme military power in the world, no one could possibly oppose it, but such an Orwellian "peace" must be resisted at all costs. It's time to walk away from the United Nations and let them find some other nation for their headquarters. Any efforts by American politicians to lessen American sovereignty by building up the power of the United Nations should be viewed as a betrayal of their oath of office, and a betrayal of the American people.

Treason in Korea - US betrayed by UN - testimony of LtCol "Bud" Farrell, USAF, ret., and others.

Michael New: A Patriot Court Martialed for NOT Wearing the UN Uniform

The Court Martial of Michael New - something I wrote years ago (1995, 1997) about the Michael New case, which still has some useful information.

[Back to the Cracked Planet] [close window]

URL: https://www.jefflindsay.com/snippets/un.shtml
Copyright © 2003. This snippet was written by Jeff Lindsay for JeffLindsay.com.

Hits: [an error occurred while processing this directive]