Peter Lee is a Hmong young man in Troop 178 of Boy Scouts of America, and is working on his Eagle Scout project. Troop 178 is sponsored by the Church of Jesus Christ of Latter-day Saints and is located in Appleton, Wisconsin.

Following the tragic death by fire of Tong Vang, a friend of Peter's and also of Peter's advisor for his project, Jeff Lindsay, Peter chose to do a community service project to help Hmong families be better prepared to deal with fire in the home. Fire safety needs in the Hmong community are especially great due to the language barrier and lack of experience with smoke alarms, the 911 service, and other aspects of fire safety. Tony Vang's death could have been prevented, and it is Peter's aim to see that such a tragedy does not occur again in the Hmong community of the Fox Cities. The following summarizes some of the activities that Peter conducted toward this project. 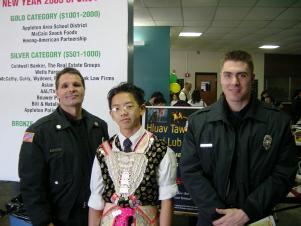 Our first major activity was reaching Hmong people at the annual New Year Celebration on Nov. 30, 2002. A lot of preparation went into this. Peter Lee and Jeff Lindsay met with Lo Lee, Executive Director of the Hmong American Partnership, and obtained his support for the Hmong New Years event. Lo Lee made arrangements for Peter to have a prominent booth at the event where he and Appleton firefighters could interact with visitors. We met with Cheryl Kuhns and Geri Larkee of the Appleton Fire Department to introduce the project and begin plans for the Hmong New Years event. They provided abundant materials (brochures, videos, smoke alarms, etc.) and arranged for many fire fighters to come help us.

We also worked with Walter Reade of the Asia-Focus Network at Kimberly-Clark. Walter shared information with other members of the group and arranged for two volunteers to help with the Hmong New Year celebration. Kimberly-Clark donated two large posters for Hmong fire safety.

The Nov. 20, 3002 Hmong New Year's Event at Appleton East High School was very successful. Peter and volunteers from Troop 178 and Kimberly-Clark set up and managed a display table at the Hmong New Year celebration. Seven Appleton firefighters assisted from 11 A.M. to 3 P.M. Literature was given to many people, and personal discussions about fire safety occurred numerous times. Dozens of people left with increased awareness of fire safety. Over 50 hours of donated time went into this phase of the project.

On Dec. 6, 2002, Peter Lee went to a 4H Club meeting at a Hmong home, organized by Soua Lor, where he showed a fire safety video and explained principles of fire safety and safe escapes. There was group discussion about fire safety experiences.

Visits to Hmong Homes in Appleton

Peter Lee and Jeff Lindsay worked again with Cheryl Kuhn and Geri Larken of the Appleton Fire Department to develop plans for visits to Hmong homes to help with fire safety. The Appleton Fire Department send three firefighters to a youth activity for Troop 178 and other young people at the Church of Jesus Christ of Latter-day Saints on Parkridge Road in Appleton. Three firefighters instructed over 40 people on principles of fire safety, and provided training to the older scouts for going into people's homes to assist with fire safety planning. 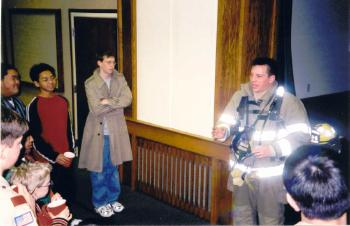 Preparations also included obtaining 30 copies of a Hmong fire safety video prepared by the LaCrosse Fire Department in the Hmong language, with the copies donated by Kimberly-Clark for distribution to Hmong families. We also contacted numerous Hmong families to arrange for visits from our trained volunteers and Appleton firefighters.

On Dec. 18, 2002, twelve young men and four adults join three firefighters from the Appleton Fire Department to visit Hmong homes, splitting up into several groups. Each group took a supply of materials, including the Hmong videos, to give to families we visited. Ten families received materials on fire safety, and were given instruction regarding escape plans, smoke alarms, and calling 911. One woman did not know how to dial 911 or say "Fire," and was given instruction and helped to practice her new skill. Two defective smoke alarms were replaced or given new batteries.

Visits to Homes in Menasha

Peter Lee and Jeff Lindsay meet with Steve Deleeuw, Deputy Fire Chief of the Menasha Fire Department, in December 2002 to discuss plans for a future effort in Menasha to reach Hmong families. With the merger of the Menasha and Neenah fire departments, this would expand to include Neenah families as well. We later met with Bill Fahrenkrug of the Neenah-Menasha Fire Dept. on Jan. 28 at the Neenah Fire Dept. to organize an event.

On Feb. 8, 2003, Peter Lee and three volunteers went with firefighter Jim Peglow of the Neenah-Menasha Fire Dept. and visited 5 families in Neenah and Menasha to check smoke alarms and give basic information. In one case, we found a wired smoke alarm that had been disabled, and gave the family two new ones that that they gratefully received. The Neenah-Menasha Fire Department also took the names and phone numbers of our group to assist with translating if the need arises in the future.

Back to Jeff Lindsay's planet

Index to Lindsay's pages on this server