Skip to content
David vs. Googleliath (or VSL vs. Google): A Small Company Fighting a Giant Reminds Us Why Software Patents MatterJeffrey Lindsay2018-01-14T02:41:59-07:00

David vs. Googleliath (or VSL vs. Google): A Small Company Fighting a Giant Reminds Us Why Software Patents Matter

A tiny start-up fighting one of the great corporate giants of all time: it’s a story of David vs. Goliath, or in this case, David vs. Googleliath. 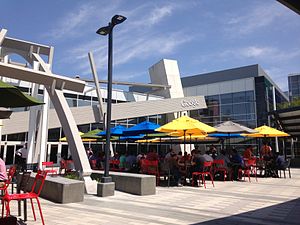 Many small companies have claimed that Google misappropriated their trade secrets or other IP, but rarely has Google graciously (and accidentally) cooperated in providing stunning evidence of their tactics the way they apparently did for Vedanti Systems, Ltd. In this case, they allegedly left sticky notes all over VSL’s trade secret materials showing their questionable intentions. If VSL prevails against the giant, it may be more a case of Googleliath falling on their own sword than David being great with a sling.

VSL and their partners are now suing Googleliath for infringement of patents and theft of trade secrets in two courts. The suits are against Google (here also known as “Googleliath”) and their subsidiairies, YouTube and On2 Technologies. London-based Vedanti Systems Limited and their U.S.-based parent, VSL Communications, Inc., have turned to Max Sound for help in enforcing their IP rights. The patent suit was filed in U.S. District Court for the District of Delaware, while the trade secret suit was filed in Superior Court of California, County of Santa Clara.

The complaints allege that Google executives met with Vedanti Systems in 2010 to discuss the possibility of acquiring Vedanti’s patented digital video streaming techniques and other trade secrets. Vedanti’s compression technology for streaming audio and video files is far superior to what Google had, Google’s own standards for streaming video t the time led to “jittery, low-quality video and sound for large-sized video files,” according to the patent complaint.

As part of the talks with VSL, Google had access to trade secrets such as VSL’s proprietary codec for encoding and decoding a digital data stream. That codex has proprietary techniques for “key frame positioning, slicing and analyzing pixel selection of video content to significantly reduce the volume of digital video files, while minimizing any resulting loss of video quality.”

Shortly after the negotiations began, Google allegedly began implementing VSL technology into its WebM/VP8 video codec, applying what they had learned from VSL but not letting VSL know. The WebM/VP8 video codec is extremely important for Google. It is used in many of their services and websites including YouTube.com, Google TV, the Android operating system, and Chrome web browser. They had inferior technology, but by allegedly stealing Vedanti’s, they were able to quickly advance their business at virtually no cost.

1. Vedanti has patents for its technology and isn’t afraid to sue. Now you might see why Google really hates software patents, eh? They have been a leading force in some of the patent reform measures and related steps that have made protecting IP rights harder than ever for little guys like Vedanti. This giant, with its easy access to the White House and many other influencers, has also been an important voice against software patents, and may have helped influence popular opinion and the courts into recent devastating attacks on software patents. But Vedanti’s patents are still alive for now, so Google has cause for concern.

2. Google seems to have kindly assisted VSL’s case by returning VSL’s trade secret materials with tell-tale sticky notes all over them showing their intent. Huh? This is really an amazing part of this story.

When the VSL Google talks ended, VSL demanded the return of its files. The returned documents were covered with incriminating Post-it notes that had apparently been left behind by Google employees. Attorney Adam Levitt claims that the notes said, among other things, that Google might possibly be infringing VSL’s then-pending patent and that Google should “keep an eye” on VSL’s technology and sweep it into a Google patent. In addition, notes warned Google engineers not to be caught “digging deep” and to “close eyes to existing IP.”

The complaint alleges that Google began to amend its preexisting patent applications and file new applications using VSL’s technology. Then in early 2012, VSL noticed that there were significant improvements to the video quality of Google’s Android operating system as well as other Google software. In June, the staff at VSL analyzed Google’s publicly available code only to discover that the code contained VSL trade secrets. Levitt asserts that the “Defendants’ theft of VSL’s trade secrets pervades virtually every website and product offered by defendants.”

“The use of new technology by established companies should be based on original creation and innovation,” said Adam Levitt, head of Grant & Eisenhofer’s Consumer Protection practice, who is representing the plaintiffs. “Vedanti Systems created groundbreaking digital video technology — technology that has forever changed the way that video content is streamed and displayed over the Internet.”

The lawsuits allege that Google willfully infringed Vedanti Systems’ patent and did so deliberately and knowingly, while recognizing the serious shortcomings of their own video streaming capabilities prior to the infusion of stolen IP.

Whether the suit will succeed or not remains to be seen, but I find Google’s lapse in leaving sticky notes on the borrowed materials to be rather hilarious, if it is true. One thing is for sure: If Vedanti’s allegations are factual, their chances of seeing some degree of justice are vastly greater by virtue of having a patent than if they did not. Software patents are essential for protecting innovations in the hugely important arena of information technology. This is the Knowledge Economy, folks, not the Iron Age. Economic growth and progress is more likely to come from advanced software and IT innovations than from hammering out better cogs and gears, and we need an IP system that understands this. Most judges and politicians ranting against software patents or patents in general do not understand this. Recent ruling that make many software innovations not even eligible for patents show that we have judges and influencers very ignorant of the physical nature of information and computer systems. Innovations like those of Vedenati are not tantamount to mere abstraction and mental exercises. They should have just as much right to be considered for a patent (provided they are novel, nonobvious, and useful) as any tool wielded by or widget hammered out by an innovative blacksmith.

Software patents matter, and they are vitally important for the best innovators of our day if they are to stand against the anti-patent giants that want anything but a level playing field. VSL vs. Google, or David vs. Googleliath, is a compelling reminder of that.

Max Sound, under agreement with VSL Communications, is enforcing intellectual property rights on VSL’s behalf and has obtained preliminary injunctions against Shenzhen KTC Technology Co. Ltd and Pact Informatique S.A., France. German Customs authorities further inspected several other exhibitors of smartphones and tablet PC’s with Android operating system. Shenzhen KTC Technology Co. Ltd. is one of the largest Chinese electronics groups operating worldwide, and Pact Informatique is a French electronics company operating in many European countries under the brand Storex. Max Sound’s actions were based on infringement of VSL’s European Patent EP 2 026 277 concerning an Optimized Data Transmission System Method. The Infringement was found on the basis that Google’s Android OS implements the H.264-Standard for video encoding, which is protected by VSL’s patent. A bailiff seized all smartphones and tablets of KTC and Pact at the trade fair IFA in Berlin on September 10, 2014. The injunctions have no automatic time limit, and opponents can file an opposition.

So what will Google do? For starters, I’m predicting we’ll see VSL and their allies soon being called some kind of “troll.” I also think we can rely on Google’s friends at the USPTO and beyond to find all sorts of reasons why Vedanti’s patents aren’t even drawn to patent eligible subject matter, regardless of how novel they may be. But the trade secret case is where I think tiny Vedanti might have a fighting chance, thanks to Googleliath’s cooperation with the sticky notes. Who said IP law wasn’t entertaining? Weird Al could have a lot of fun with this story. Suggestions for what tune to use in his spoof?