Support Your Police – But Also Get a Lawyer Before Talking

I’m a big supporter of law, order, and local police, but a tragic event involving a friend of mine leads me to this tip for all of you: If the police question you about an event where there is any chance that someone might accuse you of wrongdoing, don’t talk until you get a lawyer.
My friend is a US citizen who was born in Laos and speaks English but not terribly well. He was hunting squirrels with a 22-calibre rifle on property open to the public for hunting when a white man accosted him for the second time that day (the first time was allegedly on the white man’s property, but I doubt that), accused him a second time of having trespassed his land, began firing questions at him and accusing him of being a liar, and began moving toward him.

I can’t go into too many details, except to say that the white man later called the police and said my friend pointed a gun at him. The police showed up later at his home and an officer began asking him a series of questions concerning the incident. My friend, always a gentleman and always trying to be nice, was extremely cooperative and answered a series of questions and tried to tell him what happened, but did not know what the issues were, did not know the law, did not know his rights, and did not know how little details in his answers would be used against him. He did not have an interpreter and surely did not understand all the questions he was being asked and also may have explained things in poor English that further confused the situation.

After lengthy questioning, the officer took my friend to the police station and arrested him. Only at the station were his legal rights read to him. Had he had the help of a lawyer during questioning, it is very unlikely that the case would go as far as it has.

He was surprised to find that the confrontation with the white man in the woods would make major headlines suggesting a link to a past massacre of white men by a Hmong hunter, as if he we some kind of crazed criminal out threatening helpless white property owners. A media circus would form on his property that night, with so-called journalists trespassing on his property, refusing to leave when the wife demanded it, repeatedly pressuring family members for statements, ringing their doorbell into the night, and leaving only after the family contacted a lawyer and had him call the TV crew’s superiors telling them to back off or have the police be called again.

The man faces 13 years in prison if convicted of a felony charge of reckless endangerment, when the charges perhaps should not have brought against him in the first place, in my opinion. Had he had a lawyer during questioning, the stress on the family and the harm to the community from racially-charged news stories might have been much less.

Free Proofreading of Business Cards: One Easy Way to Help Your Immigrant Friends in 10 Seconds or Less 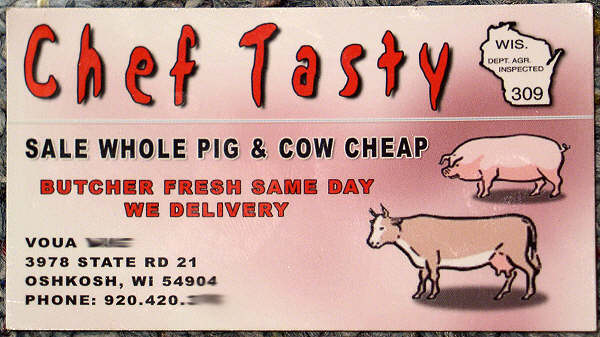 While I got a chuckle from the message of this business card that I picked up at an oriental grocery store recently, it made me realize that native English speakers could do a great service to their immigrant friends and acquaintances by simply offering to proofread materials that they might wish to print for their business. Ten seconds of proofreading would have made this business card more effective.

When it comes to offering help to our friends and neighbors with English as a second language, it’s time for more of us to step up and say, “We delivery!” Or words to that effect.