The following article, posted Oct. 5, 2016, is a tongue-in-cheek discussion intended to serve as an appendix for an article to be published at The Interpreter, A Journal of Mormon Scripture. The article examines the Book of Mormon’s famous tree of life vision of Lehi and Nephi, and explores a theory that the story was made up by Joseph Smith, inspired by a building, aqueduct, and river he saw in Rochester, New York near the end of “translating” the Book of Mormon. To illustrate how easily one can concoct parallels to modern elements to improperly “explain” the Book of Mormon, I look at another city, Dublin, Ireland, as a potentially superior candidate for “inspiring” Lehi’s vision.

The Rod of Iron: A Double in Dublin?

Rick Grunder has found a building, a river, and an iron rail in Rochester, and feels he has an incredibly compelling case that Joseph Smith used these elements to guide the drafting of Lehi’s vision of the tree of life in the final days of Book of Mormon translation. The same case could have been found in many cities of the world, for cities tend to be built on rivers, and tend to have buildings, including buildings at least four stories tall, and iron rails are found all over as well. With simple searching, one can find examples of other cities around the world bearing iron works, tall buildings, rivers, and trees.

As a tongue-in-cheek illustration of the ease of finding modern parallels to Lehi’s dream by looking at cities with “spacious” buildings and rivers, consider the University of Dublin (Trinity College, Dublin), as described in the nineteenth-century text The History of the University of Dublin. There we find clues that would seem to present much stronger parallels than Grunder has offered. We read that the majestic Provost’s House on Grafton Street at the University has a “spacious and handsome hall” (suspiciously like “great and spacious”!) with “curious” works (portraits).

Is there a river nearby? Remarkably, yes! The majestic Liffey River that flows through Dublin is only a block or two away from the Provost House, as one can see on a map of the University[3] based on the described location for the Provost House: “about 20 yards from the western flank of the Grand or Parliament Square”[4] — basically as close as the Reynolds Arcade is to the Genessee River. In front is a “handsome gateway” like the narrow gate, and nearby is a “strip or belt of ground” passing before the spacious building apparently serving as a narrow path.[5] Indeed, we are given specific dimensions for a related pathway that can best be described as straight and narrow, being some 400 yards long and 3 yards wide. In that vicinity is “a very handsome course of iron railing, seven feet high,”[6] and the purpose of the railing is apparently to keep students on the straight and narrow path, or “the paths of duty,” working together with the influence of “moral government” to keep students from climbing into forbidden dorm rooms and becoming lost in sin, so to speak. Now we can see that such an impressive, lofty railing would require significant effort to cling to (strengthening the moral message of the text), and would be easy for many to abandon and wander elsewhere.

As yet another giveaway to Book of Mormon origins, the Dublin text extols the “principles of true religion”[7] and has numerous other references to morality, discipline, education, and progress, all with parallels to the Book of Mormon.

The Liffey River in Dublin offers another excellent candidate for the iron rod, namely, the Ha’penney Bridge, whose Irish name is Droichead na Life, or could we say, the Bridge of Life (Liffey)? What a perfect source for the life-giving imagery in Lehi’s dream! Here is what Wikipedia says about the bridge:

The Ha’penny Bridge (Irish: Droichead na Leathphingine, or Droichead na Life), known later for a time as the Penny Ha’penny Bridge, and officially the Liffey Bridge, is a pedestrian bridge built in May 1816 over the River Liffey in Dublin, Ireland. Made of cast iron, the bridge was cast at Coalbrookdale in Shropshire, England.[8] 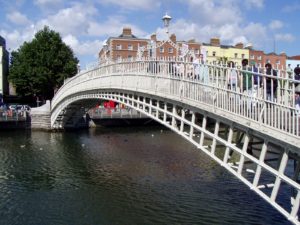 As reported on an Irish website, the bridge has become the symbol of Dublin:

The Ha’penny Bridge is the best known of Dublin’s bridges. It was built in 1816 and was the first iron bridge in Ireland. It is a single span structure with cast iron railings and decorative lamps. It was originally named the Liffey Bridge but is now called the Ha’penny because until 1919 to cross it there was a half-penny charge.

Accepted as the symbol of Dublin, the Ha’penny Bridge (officially Wellington Bridge after the ‘Iron Duke’) was opened in 1816. Cast at Coalbrookdale in Shropshire in England, the bridge acquired its unofficial moniker from the toll paid to cross the river – one old half penny. The bridge was the only pedestrian bridge on the Liffey until the Millennium bridge further up was opened in 2000.

The bridge has three lamps supported by curved ironwork over the walkway.[10]

The Ha’penney Bridge offers virtues superior to Grunder’s measly aqueduct, which was NOT a bridge for normal pedestrians. Grunder’s aqueduct was for barges, pulled across by horses and human workers, with a rail for the safety of the pullers. But the Halfpenney Bridge was designed as a pedestrian bridge, and its iron rail was one that could protect and guide numerous pedestrians. The Ha’penney Bridge with its iron railing was and still is adapted to guide the masses across the “gulf of destruction” where they can then reach the various fruit trees found throughout Dublin.

The Irish name Droichead na Life, could suggest the waters of life, but could also suggest the waters of death since “na Life” is similar to “no life” or “nay life.” (Or perhaps the Liffey was the inspiration not just for the river, but the nearby not the Tree of Life as well, or shall we say, the Tree of Liffey?) Could the Liffey River, made internationally famous by James Joyce in Finnegan’s Wake, serve as inspiration for the filthy waters of death and destruction on whose bank the iron rod begins in Lehi’s dream? Absolutely! The Liffey River is famous for dirty, smelly water. In Wikipedia’s article on the Liffey River, popular cultural references to the river include these statements:

“No man who has faced the Liffey can be appalled by the dirt of another river.”

Iris Murdoch, Under the Net.

Further, the list of statements about the Liffey remind us that it can have dangerous sections with rapids:

A skiff, a crumpled throwaway, Elijah is coming, rode lightly down the Liffey, under Loopline Bridge, shooting the rapids where water chafed around the bridgepiers, sailing eastward past hulls and anchorchains, between the Custom House old dock and George’s quay.

Did Joseph make a secret trip to Dublin, or have an Irish accomplice plying him with details from that grand university? The parallels are so strong, so historically and philologically certain, that we can readily dismiss the mundane issue of “access” that Mormon apologists continue to raise.

I must admit that it is unclear which building in Dublin would be prime candidate for the great and spacious building. As one can see in the photos of the River Liffey in Wikipedia’s article,[13] there are numerous tall buildings along the shores of the river, most with more stories than the Rochester Arcade. But I favor the Provost House of the University of Dublin, as described above, and see The History of the University of Dublin as one of the better candidates for source material for portions of the Book of Mormon.

It is easy to predict that LDS apologists will contend that The History of the University of Dublin was not published until 1845 — “Access! How could Joseph have access?!” is their standard response. Yes, official publication in 1845 may seem too late to serve as a source for the Book of Mormon, but well connected technical advisors may have provided access to early drafts of the work and the historical information used to create it. A similar issue is involved in the strongest, most impressive and convincing source for Book of Mormon plagiarism found so far, Walt Whitman’s Leaves of Grass, for it suffers from a similar alleged defect with its 1855 publication date. The methodology that so easily overcomes such objections can be applied with equal force in sustaining the The History of the University of Dublin as a model for the Book of Mormon. The question really is whether early drafts of that text or related materials were used. Between the numerous parallels from Dublin, including the University and the Provost House, the River Liffey, and the “Bridge of Life” or Ha’penney Bridge, their relationships are so strong, so compelling, that Grunder’s weak and random parallels for Rochester must be swiftly abandoned in favor of a much more certain and inescapable source for Book of Mormon plagiarism.