Where to Find Cheese in Shanghai: 2015 Update

2015 and 2017 Updates: The previously recommended wholesale market on 1255 Linahua Road that I recommended back in 2012 has been closed, and the key stores selling cheese have moved to a new location north of the airport at 333 Zhangye Road, south of Cao An Gong Lu (Cao An Highway). But the best way to get cheese at low prices may now be to simply order large chunks of Gouda cheese through Taobao.

One of the great mysteries of expat life in Shanghai is where to find cheese. Some expats rely on expensive cheese sold in small delis in the French Concession or places like the deli at the Westin Hotel/Bund Center. Some rely on cheese sold at supermarkets such as Tesco, Metro, Carrefour, or City Shop. But if you use a lot of cheese or just want the best price on cheese, you should know about the food warehouse in Jiading District which supplies cheese and a lot of other products to restaurants all over town. There you can buy cheese for prices surprisingly close to what you might pay in the United States. A 3 kilogram block of good Gouda cheese was purchased yesterday by my wife for 165 RMB. That’s under $4 a pound for cheese in Shanghai. Awesome! You can also get similar blocks of mozzarella, Emmenthaler (Swiss), or cheddar. We love the rich, full flavor of the Gouda cheese, though. 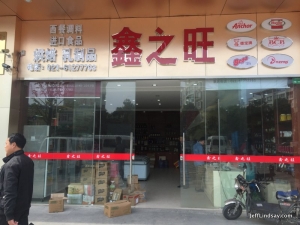 Sunline (Xinzhiwang) at 333 Zhangye Road: This is the place for inexpensive cheese! 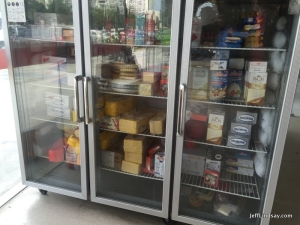 Big blocks of cheese in this cooler. 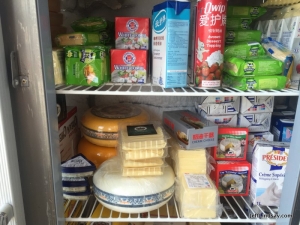 Cream, cheese, and other great products in the cooler. 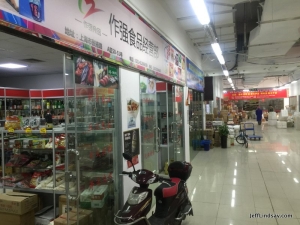 Some of the other import stores and dry goods stores inside the complex. 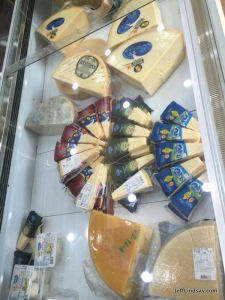 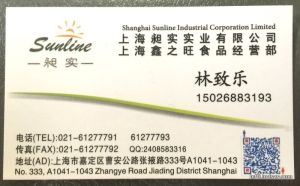 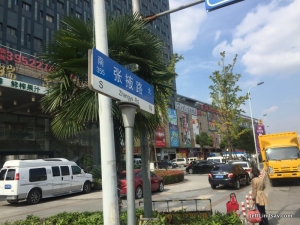 View of the complex from the street.