Just returned from my second trip to Thailand. The first was in Bangkok. This time we went further south, flying to Phuket, then taking a ferry to Phi Phi Island (Kho Phi Phi), another ferry to Krabi Town, and then flying to Chiang Mai.

Thailand is one of the easiest places in Asia for Westerners to visit and enjoy. It’s generally safe, both in terms of personal security and the safety of the food. It’s also convenient, for the most part, for most important signs include English and many people speak English, so hotels, restaurants, and shops are easy to use. Many cabbies also speak some English.

While theft is low and the people are usually honest and kind, there are some risks. On Phi Phi Island, a man from Brazil we met explained that shortly after he used an ATM machine at a  bank on the island (one of the numerous yellow ATM machines associated with Krungthi Bank), his account had several thousand dollars stolen from it. The ATM appeared to be secure and did not have bogus scanners or cameras attached to it to steal his card information. After discussing his case with his bank card company, he concluded that someone at the Thai bank must have helped make this theft possible. He went to talk to the local bank and of course, they denied any knowledge or complicity. One day he might get his money back, perhaps, but he was relying on that account to pay for the remainder of his trip. Fortunately, he had brought along enough cash to get by and would be OK, but the prospect of having an account cleared out by a local thief working in or with a bank made me unwilling to risk using an ATM card in Thailand.

My tip: avoid the risk of ATM fraud by bringing enough cash for your trip. I had brought along some hundred dollar bills from the US, and before coming my wife had converted Chinese RMB into Thai Baht at a bank in Shanghai. We budgeted our last couple of days very carefully so the money we had converted turned out to be just enough (OK, I skimped on our last meal and wished I had had another 100 Baht or so), avoiding the need to use an ATM machine or to use any credit cards in Thailand. (To be fair, I also avoid using credit cards in China, and am constantly on the alert for ATM risks, though I do use ATM machines in China frequently.)

In Bangkok, taxis are a pain because they want to charge foreigners very high rates and don’t want to use the meters. Have a Thai friend help or at least know what a reasonable fare should be for your destination so you can negotiate from a position of knowledge and walk away when the rate is way too high.

In Chiang Mai, there are metered cabs at the airport, but they are rarely seen on the streets. Instead there are abundant tuk-tuks (motorcyle-powered vehicles with three wheels that seat two people) and red trucks (small covered pick-up trucks with seats in the back that can hold up to about 10 people). Fares are negotiated but are usually quite inexpensive (maybe 80 Baht to get across town, 20 or so Baht for a few blocks). You can rent one of the red trucks for a private trip to a destination like Doi Suthep. For long trips or any trip where you care about comfort, safety, and the ability to see where you are going, rent a private driver in a nice car (typically a minivan). A day of driving in the off-season will cost around 1000 Baht (about US$27).

Both of our trips have been in the fall (September/October), which is a great time to visit Thailand. Not too hot, not too crowded, though it is the rainy season so be prepared for several days of rain. For us, that was OK. It was still sunny when we really needed sun and fine otherwise, though some views were less than ideal. But we here that in the peak seasons, the popular beaches and other attractions can be both unpleasantly hot and overcrowded. Not for us.

Electricity is fairly easy to manage. US plugs, both two- and three-pronged, will fit into the standard outlets here, which are around 220 V. No problem for typical electronics. I’ve read that sometimes outlets aren’t well grounded, so be careful, but we had no trouble in the places we stayed.

In spite of the beauty of Thailand, many places can be a little run down. Watch your step: sidewalks may have unexpected holes or other dangers. Walkways may be missing boards or have dangerous openings or unstable sections. Watch your head also: there are plenty of poles and other objects waiting to gouge your head if you aren’t careful, especially if you are tall.

It’s a beautiful country and a great place to relax, enjoy the scenery, enjoy adventures like elephant riding, diving, and white water rafting, and enjoy wonderful food. As for food, Khao Soy, a Chiang Mai specialty, something like a coconut-based curry with noodles and fried noodles on top, was one of our favorites, along with Massaman curry and Panang Curry. We also loved the fresh fruit drinks and smoothies. 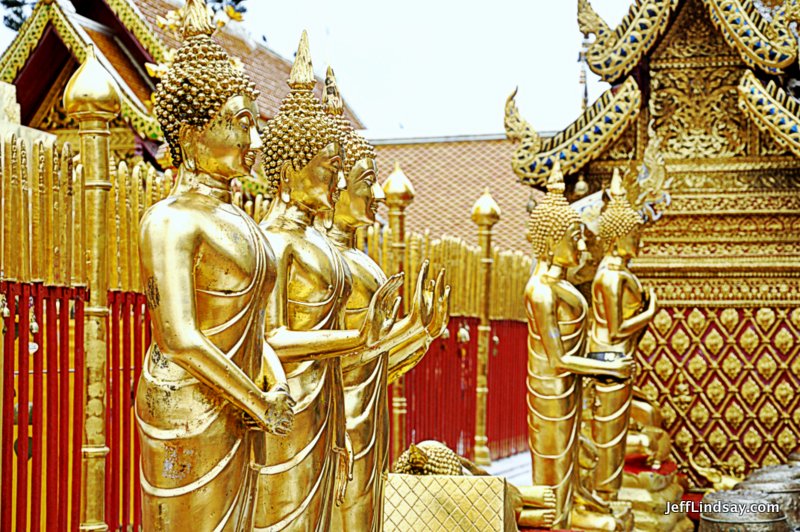 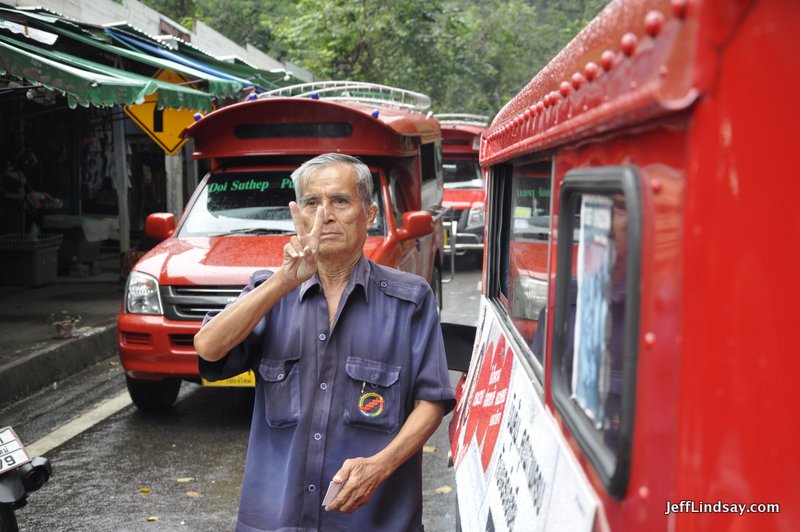 A red truck driver (cabbie) and his vehicle 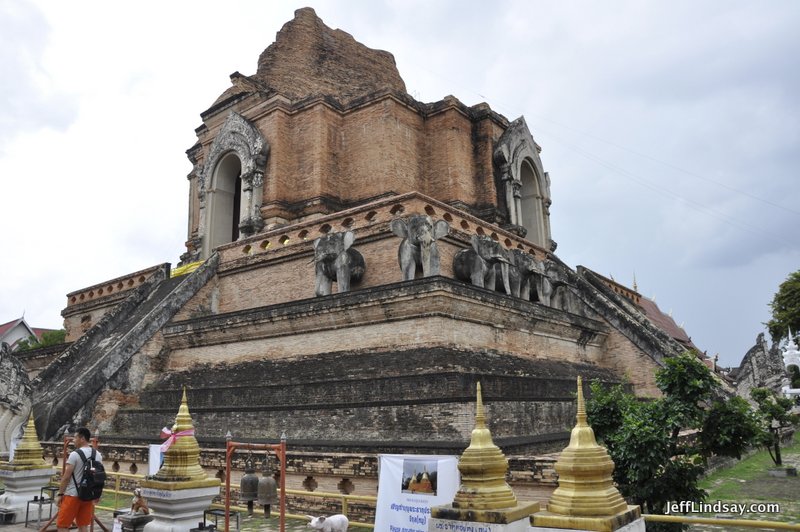 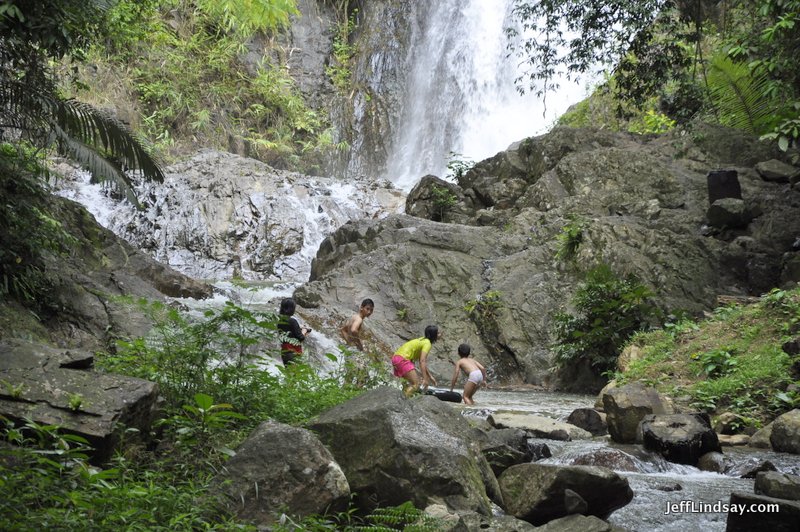 Huay To Waterfall near Krabi 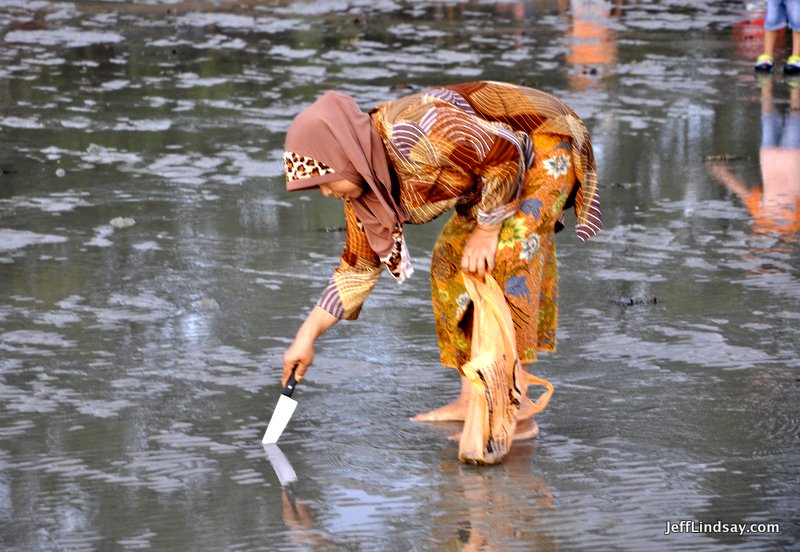 Digging for clams at Aonang Beach 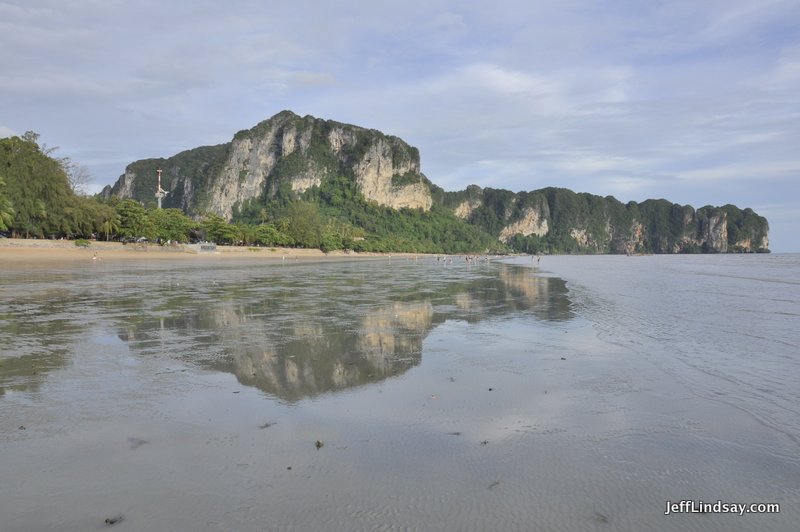 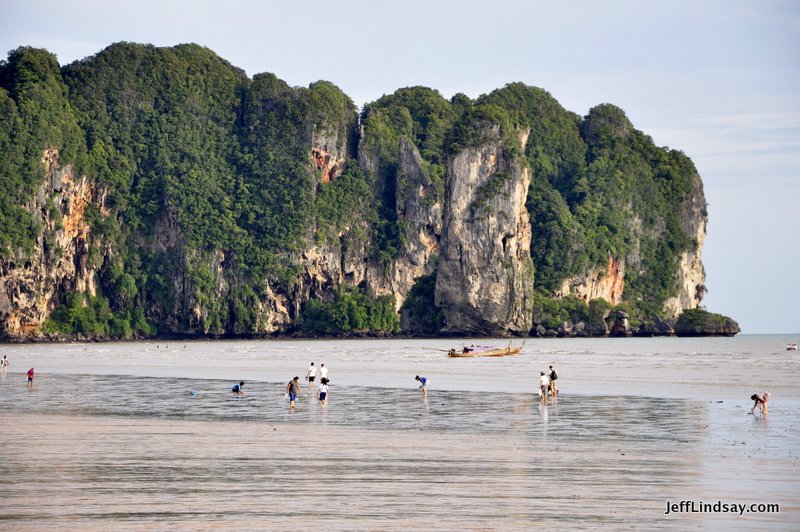 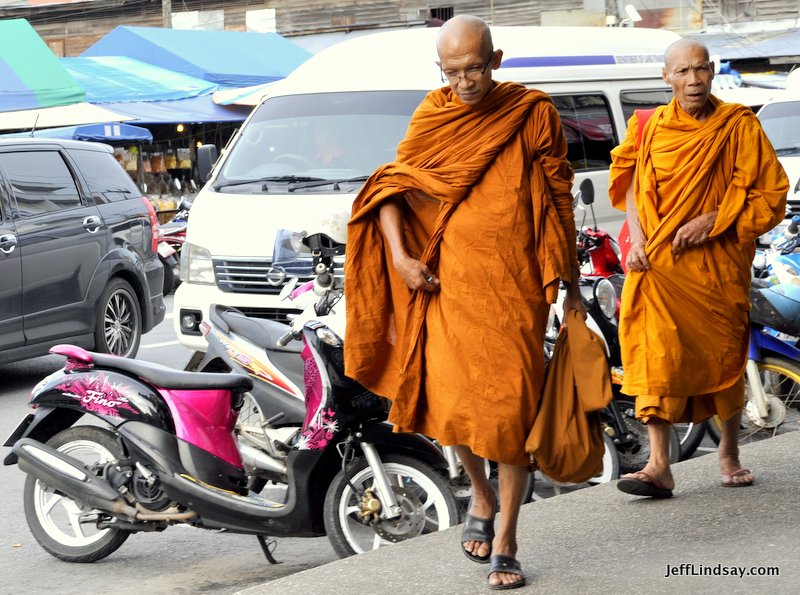 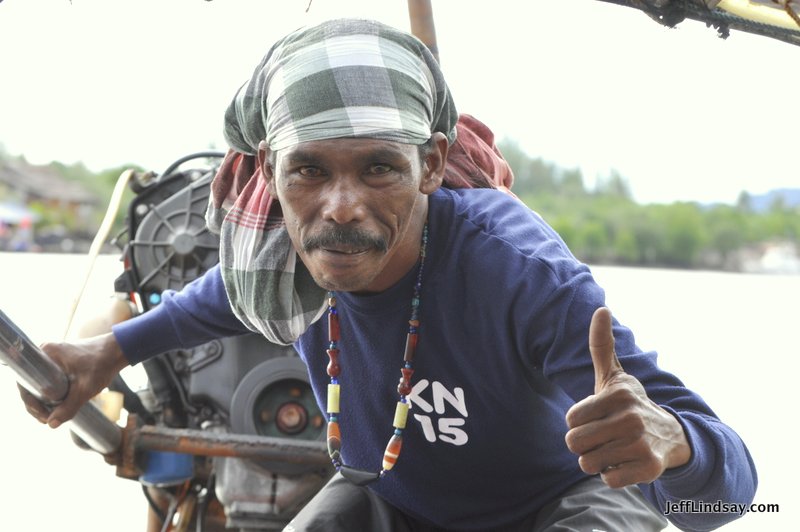 Our boat driver on a tour near along Krabi’s waterfront 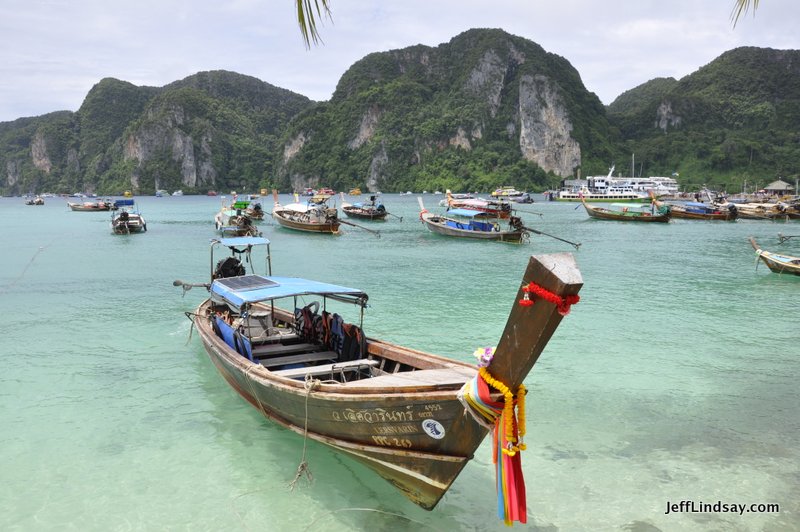 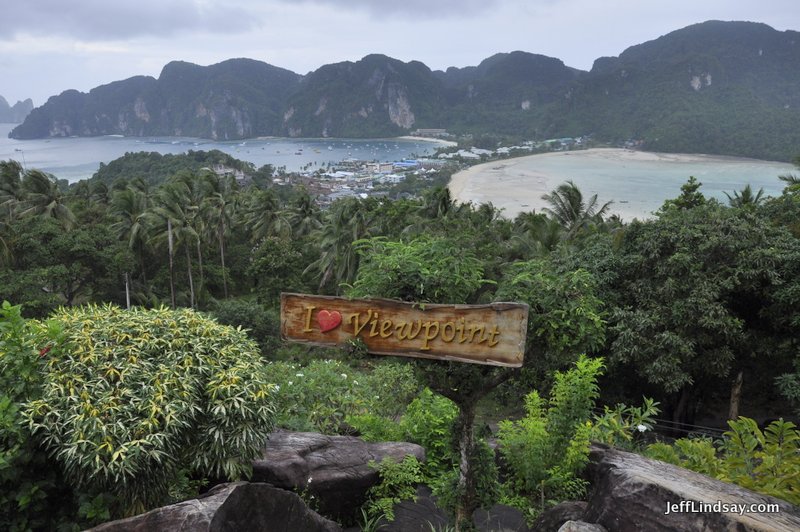 View from the “Viewpoint” on Phi Phi Island 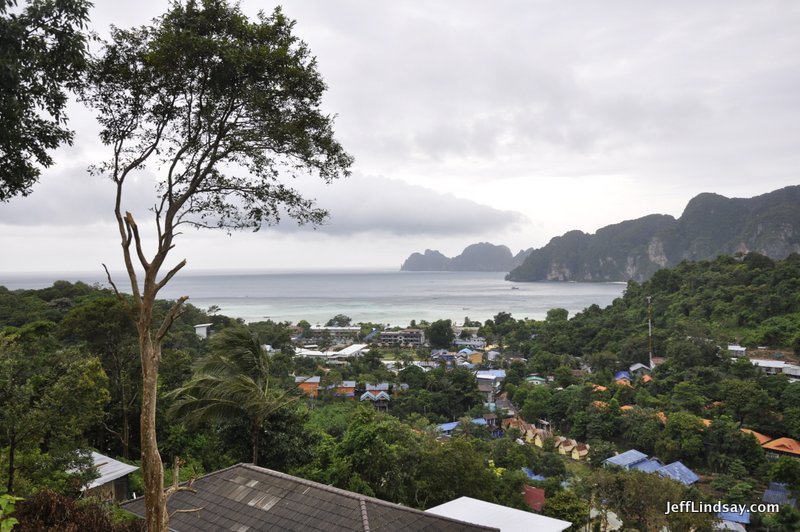 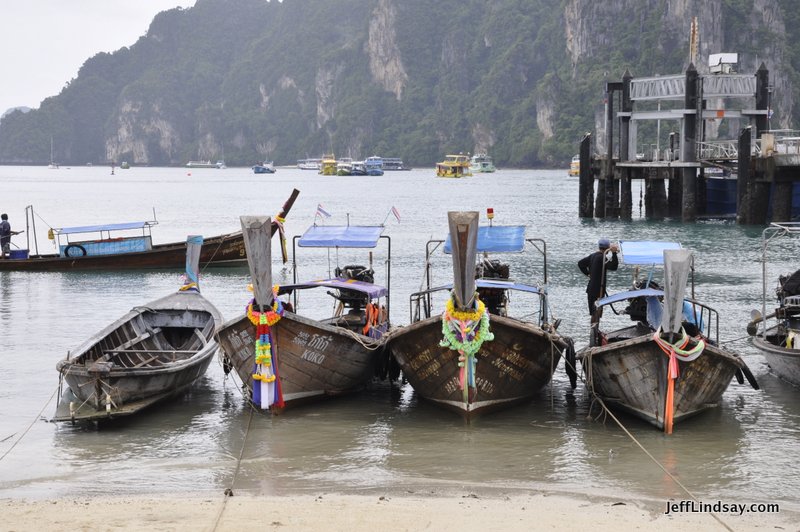