Dec. 2017 Update: Creme Milano’s website is down, and that means the company may be toast. For now, Ice Season may be the best way to find gelato, though it really isn’t up to Italian standards. Good ingredients and flavors, but not the right textures and the temperature is often too low as well.Â

Ever since my visit to Italy a year ago, I’ve been on a quest for good gelato, and have found a couple of fairly good brands here that draw upon Italian know-how.

Gelato was on my agenda following an intellectual property conference in Shanghai, the IP Business Congress Asia 2014, held Dec. 8-9. My wife and I took an IP lawyer from the States and his wife to dinner at the beautiful and delicious TMSK in Xintiandi. After dinner, the lawyer and I wanted to try some gelato, so we went west to Danshui Road to visit a Creme Milano gelato shop, a gelato chain in Shanghai where I’ve had some excellent gelato several times in the past.

When we entered the store, something seemed a little different. No, a lot different. The gelato bins, normally full and carefully groomed, looked sloppy and the trays were mostly empty. What remained looked rather like old relics. We did the best we could by finding a couple of flavors to order from the few surviving bins, but the flavor and texture was unimpressive and the servings were unusually small and stingy. What had happened? Were sales so poor in our cooler weather that the store had just given up and failed to keep up appearances? I was let down.

The next day, I had lunch with another friend and mentioned the bad gelato experience. He knew the people running the business or at least helping to run it. He said he would them give my feedback. He called later that day to tell me surprising news from the owner: the gelato store we had visited was a rogue shop that no longer was getting its product from the authentic source as they were supposed to. I don’t know if the product we had was leftover original gelato or some fake gelato or ice cream from another source. But it wasn’t what I was expecting and what I would find again at the mother store on South Shaanxi Road.

After I sent an email to the owner of a gelato brand in Shanghai about my disappointing experience in the rogue shop and their need to take action to protect their brand from being tarnished, the owner invited me to come to the mother store at 434 Shaanxi South Road in Shanghai’s beautiful French Concession area. We were warmly greeted by the store manager and marveled at the contrast between what we could see in front of us and what we had seen in the rogue shop. 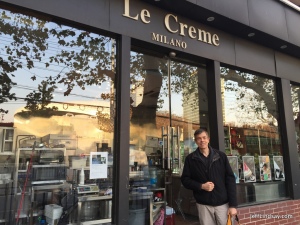 Jeff in front of the mother store of Le Creme Milano

The difference in taste was even more impressive. Gelato is not just another name for ice cream. There are large differences in method of preparation, the ingredients, and even the temperature it is served at. Gelato is more like a rich, very thick fluid rather than the fluffy solid of common ice cream. It takes skill and artistry to make it right, and what a delight it was to encounter real gelato once again. Ahhh! 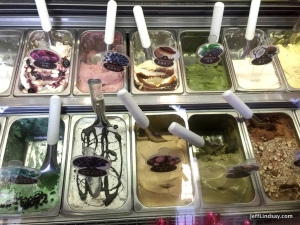 Real gelato, fresh and delicious, at the South Shaanxi Road station, across from the Shanghai Culture Square.

We ordered some gelato after sampling several heavenly flavors. I ordered a small cup with a little pistachio flavor and a little blueberry yogurt. The small cup was packed to hold about as much as possible, nearly overflowing with goodness, unlike the miserly, well-below-the-rim portion I received in a cup of the same size at the rogue shop. Both flavors were unforgettable. To my dismay, though, after we received the gelato, the manager refused to take our payment. What kind treatment! It was my birthday, but they didn’t know that in giving me this perfect birthday gift on a little birthday adventure.

Experience real gelato at a real Le Creme Milano store in Shanghai. There may be one or more rogue shops out there selling inferior product, based on what I experienced and learned from the owner. How disappointing that there are stores (at least one) with the nameplate of Le Creme Milano that aren’t selling the real product. I hope the other Creme Milanos in town are legit. 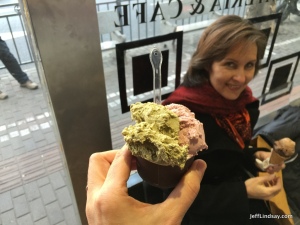 A small cup with a generous portion of gelato at the mother store on South Shaanxi.