History in the Making: The US-China IP Adjudication Conference, May 28-30, 2012, Beijing

After 3 years of planning and navigating complex political waters, a historic event finally took place in Beijing last week at Chinaâ€™s top university for IP law, Renmin University. Top justices, judges, lawyers, business leaders and academicians from the US and China gathered for 3 intensive days of sharing regarding intellectual property and the courts. There were over 1,000 people that attended, including numerous judges and IP thought leaders from China and the US. The number of judges from China was said to be 300, though most of the Chinese people I met were not judges but lawyers, business leaders, and students, though I did have lunch with a Chinese judge and met several in other settings during the conference.

The leaders and speakers of the conference included US Court of Appeals for the Federal Circuit (CAFC) Chief Justice Randall Rader, one of the most brilliant and influential minds in US patent law whose decisions have long been shaping US law and practice. He is a strong advocate of international collaboration and appears to have been one of the primary driving forces between this event. I was pleased to see a total of 7 Federal Circuit judges present, most visiting China for their fist time, including these 6 Circuit Judges: Raymond C. Clevenger III, Richard Linn, Timothy B. Dyk, Sharon Prost, Kimberly A. Moore, and Jimmie V. Reyna. Also playing prominent roles were Gary Locke, US Ambassador to China; David Kappos, Director of the US Patent and Trademark Office; Mark Cohen, the USPTOâ€™s former AttachÃ© to the US Embassy in Beijing; Steven C. Lambert, President, Federal Circuit Bar Association; and many others. Mark Cohen wowed the crowd by delivering his speech in fluent Mandarin, though his rather erudite citations of Chinese poetry and classics sometimes challenged the gifted translators who made this bilingual conference accessible to everyone present.

On the Chinese side, we were elated to have active participation by Chief Judge Kong Xiangjun, IPR Tribunal of the Supreme Peopleâ€™s Court. Also from the IPR Tribunal of the Supreme Peopleâ€™s Court were Deputy Chief Judge Jin Kesheng, Supervisory AttachÃ© Zhang Shengzu, Presiding Judge Yu Xiaobai, Presiding Judge Wang Yongchang, Presiding Judge Xia Junli, and Judge Zhu Li. These judges, with the 7 from the US Federal Circuit, were part of an â€œen bancâ€ panel discussing US and China law and IP adjudication. Fascinating! Also representing China was Chong Quan, Deputy Deputy China International Trade Representative and a leader of MOFCOM (China Ministry of Commerce).

In addition to many keynote speeches and panel discussions, there were also breakout sessions on such topics such as trademark law, patent litigation, pharmaceutical patent adjudication, and copyright law. Definitely one of the most interesting and information-packed IP conferences I’ve ever attended.

For many, the highlight may have been the afternoon of mock trials in which the same case was presented in an appeal to the US Federal Circuit and to the IPR Tribunal of the Peopleâ€™s Supreme Court of China. Judge Rader lead the 3-judge panel for the US mock trial. The mock trials allowed representatives of both nations to quickly grasp important differences in procedure, though both courts came to essentially the same conclusion in a genuinely interesting real case involving an advance in safety equipment for a circular saw. Following the trials, there was further exchange between the judges of both countries as they discussed their different systems and what they had learned from one another. What a tremendous learning experience and example of meaningful international cooperation.

The rapidity of Chinaâ€™s progress in IP law and adjudication has been breathtaking, in spite of the many complaints made by voices in the West, and the obvious need for further improvements. But from a historical perspective, to go from virtually no IP law in the early 1980s to a world-class system that is leading the world in patent filing now, with the ability of foreign plaintiffs to win against Chinese companies in Chinese courts, represents massive progress worthy of respect. Exchanges like this recent one in Beijing will influence the thought leaders of both nations to further learn from each other and strengthen our approaches to IP law. Many thanks to all those who made this monumental event possible.

In the closing session, I was able to ask a question to the panelists about what future impact they anticipated might come from this exchange. Chief Judge Kong kindly fielded that question and spoke eloquently of the growth of IP law in China and the rich opportunity they had to draw from the US experience and strengthen their system. There is no doubt in my mind that China is rapidly learning and growing and a visionary eye toward the future. I hope the US can keep up and remain a worthy partner and competitor!

Below are some photos of the event that I took. 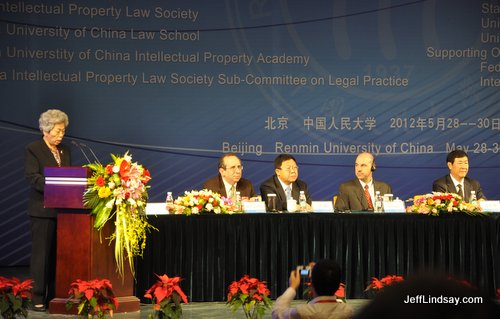 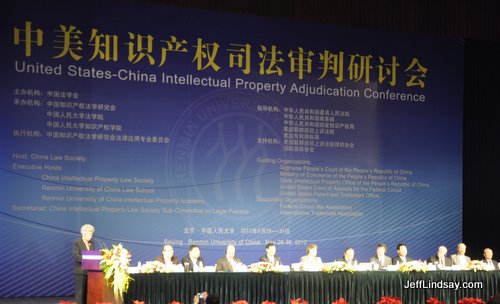 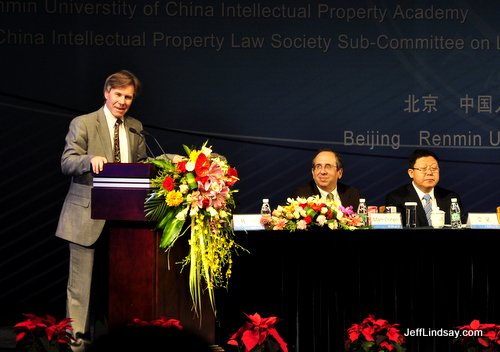 Chief Judge Randall Rader is one of the rock stars of IP--literally. I asked him if he was going to perform for us in the evening but sadly, he informed me that he had left his band behind in the US for this event. I took the opportunity to compliment Judge Rader on setting a great example by being visibly active in areas other than his profession alone. His pursuit of rock music with a real band, even while in the judiciary, is one of many attributes that makes Judge Rader one of the more interesting and likable people in IP law. His passion for China is also part of the Rader equation. Many thanks for making this historic event happen!

Jeff Lindsay in front of the Ming De complex at Renmin University where the Adjudication Conference was held. 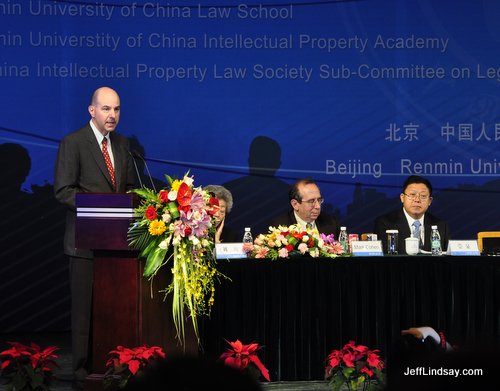 David Kappos, head of the US Patent and Trademark Office, speaks. His support for this event was crucial and much appreciated. 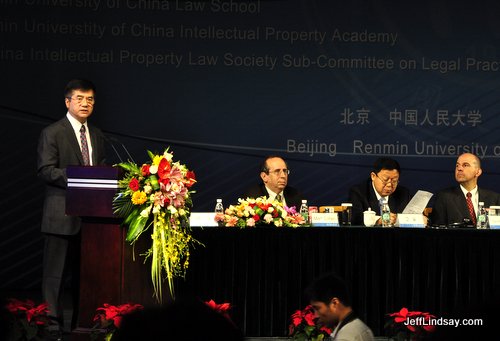 Gary Locke, US Ambassador to China. 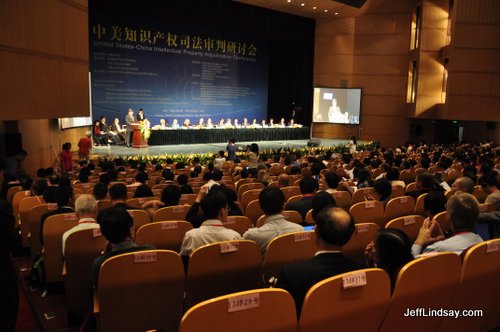 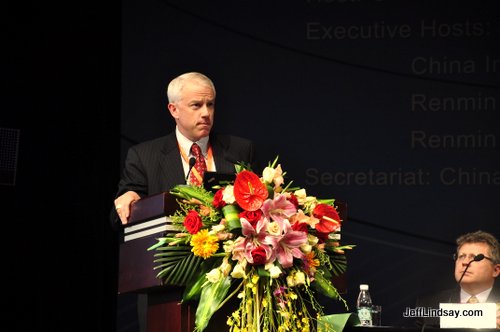