Surviving China Tip: The Glass in Your Bathroom May Not Be Safety Glass 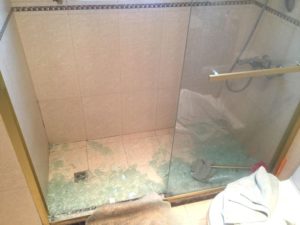 From an earlier disaster: the remnants of a shattered shower that cut my wife’s foot when it failed as she simply tried to exit the shower.

As I write, I’m looking at three new cuts on my right foot that happened when my elbow gently bumped a glass shelf in the corner ofÂ  my walk-in shower. The glass was unsecured and it only took a gentle bump to send it to the floor. When it shattered, fragments of glass went flying, 3 with enough force to cut my foot that was about 30 centimeters from the impact. One gash was about an inch long, while the other two were small puncture wounds. But none were welcome on a busy day like today.

In China, don’t assume that safety glass has been used in places where you would expect it. If there is something like a glass shelf in your shower, remove it if you can because when it breaks, you might be injured.

My wife had a more serious problem in a different apartment. One of the two sliding glass doors of the shower wouldn’t slide at all because the roller bearings supporting it were so old that one of the little rubber rollers it required was missing about half of the rubber. The landlord refused to repair the glass door and said it was still possible to move the other door, though it, too, was becoming rough for similar reasons. But she refused to spend any money to repair it. A few weeks layer, as my wife was trying to exit the shower, the door wouldn’t move normally. She grabbed the metal bar on the shower door and tried to slide the door open, at which point the entire door shattered. It crumbled as if it were made from some kind of safety glass, but there were still hundreds of sharp edges and her foot was badly cut. (As I said, be careful with anything glass in your bathroom or anywhere else. There could be danger a foot. Or both feet.)

When we reported this to the landlord, complete with photos of the shattered glass and her bleeding foot, we did not even get a “sorry!” in response. Her reply was that this was our fault and we would have to buy her a new glass door. We met later and after some firm negotiation, we got that down to just paying for half of the cost of the door. Plus she chewed us out for having thrown away the metal pieces from the shattered door, which added to the cost of the repair. We were out about $150. We could have gone to arbitration and easily wasted much more than $150 worth of wasted time and anxiety, perhaps with a victory, or more likely the kind of ruling that is favored in China: “Why don’t you two just split the difference? You guys pays pay $150.” We wanted to stay on friendly terms with this woman and chose not to fight — it’s often futile, anyway.

Incidentally, we spent a good deal of our own money to fix up the apartment belonging to that particular prior landlord. We paid to have an ugly living room painted in fresh white, bought new furniture, decorated it, etc. She was impressed with how much better it looked. Delighted, in fact. So delighted that she realized that her attractive refreshed apartment could be rented at a higher price than the good deal we had obtained when we moved in, so she announced that she was raising our rent by 30%. Ouch. We refused and moved out. Glad to go, though we loved the place and the complex it was in.

Our current landlord, though, is just wonderful. Very kind to us and very attentive, often brings us good food, and is a friend. But we are sad that her place is getting old and will require some serious repairs in the future for some of the things that we are just living with because we like her — things like corroded original water pipes under the floor that were replaced recently with a wild system of visible PVC tubes running between rooms. Probably not up to code, but we’ve been able to cope. Just wish the glass shelf had been made with safety glass!

This tip applies to apartments, hotels, and anywhere else there is glass that could break. Be careful here or in any part of the world. My bad for not removing the glass shelf before the accident!