When Cabbies Dump You 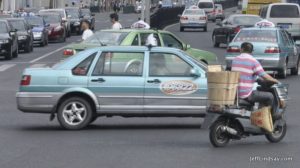 Though most of my cab rides in Shanghai turn out well, occasionally something goes sour. In the heat of the moment, it’s easy to make some serious mistakes, just like I did today.

My cab ride had just begun when I pulled a beloved Chinese epic sci-fi novel from my bag to begin some precious reading time. Suddenly the cabbie saw something come in on his cell phone and turned around and told me that he was sorry, but I had to get out so he could go get another customer. Had I been better prepared, I would have said no, I’m your customer, and please take me to my destination. This might not work and sometimes could lead to a big argument or even physical fight, but I should have resisted or at least have him take me a little closer to my destination or to the nearest subway or something better than what I did, which was 1) give up easy and 2) make a dangerous and actually illegal exit in the middle of an intersection.

“Rats,” I thought, when he told me to get out. I resigned myself to his rejection, but was actually too cooperative. He was in the left lane at an intersection at a red light. There were just seconds before it would be green, so I needed to hustle. It wasn’t a busy intersection, but still, it was wrong to let him force me out there. As I hastily prepared to open the right door, I was focused on traffic coming along the right side of the car, not wanting to be hit by a motorcycle or other vehicle. This was stupid and dangerous, for I at least should have insisted that he first drive me to a safe spot.

I got out safely and he drove off. Only later would I realize that he had my beloved book, with many markings and notes, sitting unloved in the back of his car. I was only 75 pages into it, but it was a painful loss, and I had no way to reach him because he didn’t charge me for the brief ride, meaning I didn’t get a receipt.

Rule #1 of cab rides is NEVER GET OUT WITHOUT A RECEIPT. The main reason for this is in case you leave something behind, you can use the receipt to call the company and identify the driver and get your goods back in most cases. (It also is essential if you get double billed if you got the cab through WeChat, paid by cash, but then also got an automated WeChat bill.) But a corollary to that rule is if you are being booted out without a receipt, get a photo of the driver’s ID posted in the front of the cab and a photo of his license plate number in case you need that info later, either to recover lost goods or, as in this case, to also report illegal dumping. And you might as well ask for an old spare receipt (fapiao) as partial compensation for your lost time–they usually have several.

Of course, if you have your wits about you enough to get the ID and license plate, you will also be thinking about not losing goods and looking carefully before you step out of the car. But this requires being smart enough to step out of the car in a safe spot where you can take the time to slowly gather your things, check the seat carefully, and gracefully exit instead of just making a made dash to get out of an intersection while someone drives off with your book (or cell phone, wallet, passport, etc.).

Recapping, when a driver wants to dump you for another customer:

By knowing your rights and being assertive/annoying in a calm, friendly way, you may help him realize that cabbie crime doesn’t pay, maybe making things easier for the next customer. But don’t provoke him into extreme anger. Some cabbies have assaulted passengers, so be careful. You can just roll over like I did — but don’t do it in a rush, for you are more likely to lose things and have an accident. Take your time and insist on safety.

For me, the loss is mostly recoverable, for I just ordered a new copy of the book on Amazon.cn, and will have it back in my hands tomorrow. Taxi losses can be much more painful than that, so be careful and keep your wits about you.