Review of The Lion King Musical at Shanghai Disney Resort, the Chinese Version of the Broadway Hit

The Chinese version of the Broadway hit, The Lion King, was one of best performances I’ve seen. Spectacular, beautiful, wonderful to watch, even for those who don’t speak Mandarin, the language it is performed in at the beautiful theater in Disney Town at Shanghai Disney Resort. We attended a matinee performance on June 11, a few days before the official opening. There were no serious rough edges that we could see. The cast was wonderful, though a few voices weren’t as strong as one might encounter on Broadway. I was particularly delighted with the costumes, which were brilliant, clever, beautiful, and fascinating to watch. Special effects were also nicely done. Dramatic, fun, well choreographed, just a lot of fun. I really like the uniquely Chinese elements that were added such as the appearance of the Chinese Monkey King a couple of times. I understand one of the songs was added also for the Chinese production, though I’m unclear on that. The Disney Town theater is spacious and comfortable, and I think seats about 1500 people.

If you are coming to Shanghai, attending The Lion King might be one of the big attractions you should plan for. Note, however, that going there by taxi can be rough since many cabbies don’t know the area yet and since the Shanghai Disney Resort Website is surprisingly deficient in basic information on how to get there. There is no map or address given! There is a chat function for help, so I tried in many ways to squeeze information out of the chat service, but they insisted that there was nothing to worry about, that you just had to say “Disney” to cabbies and they would know where to go, which proved to be completely wrong for our friends who tried to meet us early at the theater to get their tickets. I eventually got an address from the chat service–actually 3 addresses, which confused things further, but none of them were helpful to the cabbie and my friends, came within a couple minutes of missing the opening of the performance. As of today, June 23, 2016, the website still lacks an address for those coming by taxi. Huh? I tried about several times to ask the chat service person to let the webmaster know this needed to be added, and just got the delusional “no worries, there is no problem, cabbies will know how to get there” response. Disney, wake up! You are not the Middle Kingdom in the center of the world where everyone knows your location. You are in an obscure remote corner of the outskirts of Shanghai and people don’t know how to drive there.

Best to go by subway. Line 11 ends there at a station clearly marked as “Disney.”

Here are some photos of the theater. 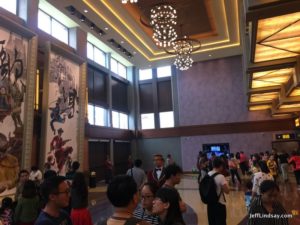 Inside the lobby of the Disney Town Theater. 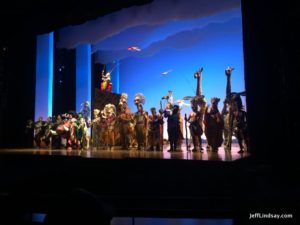 Final bow of the cast of The Lion King, , Shanghai Disney 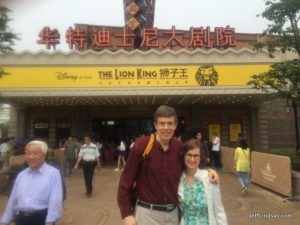 Outside the theater with my wife. 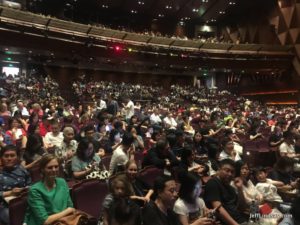 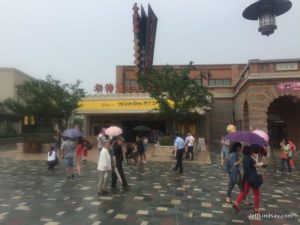 Another view of the theater.

Before or after the show, enjoy a meal at one of the many good restaurants in Disney Town. This is a fun place that doesn’t require a ticket to get in. Just stroll from the subway (Line 11, Disney station) to Disney Town and enjoy the beautiful surroundings. The restaurants include some of China’s most popular higher-end places like Shanghai Min (wonderful Shanghai-style food, one of my favorite places), The Dining Place (fairly inexpensive dim sum and Shanghai fair), Element Fresh, Simply Thai, and many others. We tried a tremendously popular US restaurant that is the first of its kind in China, the Cheesecake Factory. We were very impressed. They have a menu just like the typical menus in the States, with strong leadership from the States here to train the staff and ensure high quality service and food preparation. Food was delicious though pricey for Chinese standards, but portions were also huge, maybe twice the size we are used to in China, so for us a single dish shared would have been enough, coupled with the appetizers were bought. I had Jamaican chicken and shrimp, and it was so flavorful and tender. The guacamole was surprisingly good, almost perfect. A slight disappointment was that the fish tacos were almost cold by the time they came to the table. Looks like they try to bring all the food at once, which means uneven wait times for some dishes. Ask to have food brought hot as soon as each dish is ready. More work for the sometimes overwhelmed staff at this hugely popular place, but you deserve your food fresh and hot. 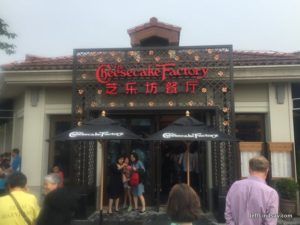 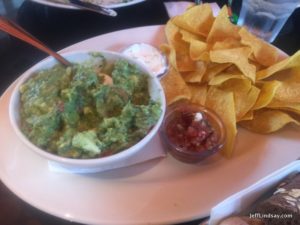 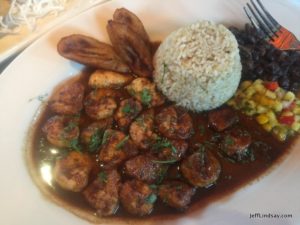 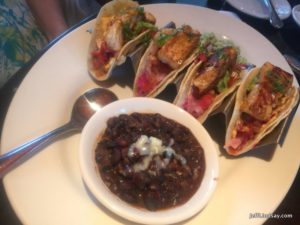 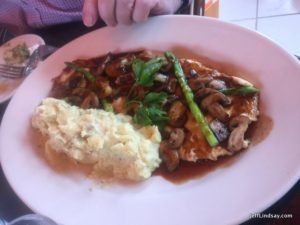 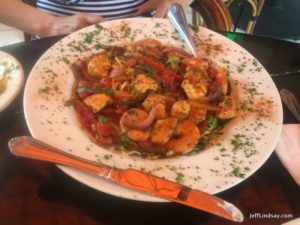