Food Poisoning: Beware of Hamburgers and Other High Risk Items 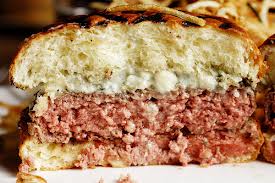 Was it the meat? The mayo? the lettuce? Or maybe the shake? It’s hard to know with food poisoning.

I had a call at 2:15 AM this morning from a victim of food poisoning, a friend who had just been taken to one of Shanghai’s many hospitals with quaint names. This one was the Armed Police Hospital of Shanghai on Hongxu Road near Yan An Road in Hongqiao, not far from where we live. He had been out with some friends eating at Munchies, a popular joint serving basic Western food like hamburgers, shakes, and fries. I ate there once a few months ago and thought it was OK but not interesting, and avoided the hamburgers due to my concerns about the risks of food poisoning. Hamburgers are already a common source of food poisoning in the States, and I think the risks will be higher here.

My friend had eaten a hamburger, shake, and fries. He guessed that his food poisoning came from bad oil in the fries or bad cream in the shake. My guess is the hamburger was the culprit. Hamburger is so often contaminated with bacteria and is too easy to undercook or recontaminate with sloppy handling. But who knows, it could have been bacteria on dirty lettuce in the burger. I doubt that bad oil would give the violent food poisoning reaction he had, with hours of pain and loss of everything in his digestive tract.

He eventually became so dehydrated and weak and in so much pain that he realized he was in medical trouble, so he called for help and soon was being carried away in an ambulance. In his weakened state, he forget to bring a wad of cash with him. Mistake! Bring lots of cash when you go to the hospital. Bringing an ATM card can work, but if there is trouble, then what? He was so weak when he got to the hospital that his fingers kept slipping as he tried to enter the long password code for his bank card, and after 3 tries, his card was locked and unable to be used at all. He called the bank to clear it, but was told he had to come in personally when the bank opened again later. Not good at 2 AM when you need to pay now for urgent help.

In China, if you don’t pay upfront or have proof of adequate insurance (that may not work in many cases), you aren’t going to get treatment, as far as I know. Understand that and be prepared. The hospital staff suggested he call a friend. I normally put my phone in silent mode when I go to sleep to prevent unwanted calls in the middle of the night. Last night was an unusual exception, and I’m glad I didn’t. I was able to rush over and help out, handling the payment. 650 RMB is all it cost for him to get a lot of good attention (once payment was made), an IV with several bags of fluid, medication, etc. The kit of supplies I received for him after payment was really impressive. Treatment was good, the place was clean, and the staff were efficient and friendly. Pretty good for a public hospital in the middle of the night. Remarkably low cost. Not bad.

What is bad is food poisoning. It can really hurt and make life miserable. Staying hydrated when you are hit with it is a real challenge. Drink lots and lots of fluids, even though you might lost them swiftly. Gets some salts also. Gatorade might be a good beverage to keep on hand for such cases. But do your own research to prepare. Keep some cash in your wallet or in a handy place at home to take with you to the hospital, along with one or two bank cards, your cell phone, and a cell phone charger, etc. Be ready. And especially be careful about what you eat. It’s a key to surviving in Shanghai, China.